SOLD TO A PRIVATE COLLECTION

This Celtic inspired panel was originally intended as a bed head and is one of only three known sets of head and footboards in existence; of which one incomplete set is at The Watts Gallery in Compton, Surrey. Each set is apparently a one-off with very slight differences between them and were modeled directly without the use of a mould (for comparison see “Mary Seton Watts - Unsung Heroine of the Art Nouveau” by Veronica Franklin Gould, p 40).

Its practical size makes it ideal for hanging on the wall or indeed re-instating as a bed head. One of these bed head panels was exhibited by her in the Compton display in the 1901 Home Arts Exhibition; symbolizing a sleep blessing apparently used by fishermen from the west coast of Scotland.

Central section, with Celtic knot motifs and angelic figure above; flanked either side by two further bowing angelic figures. To the left is a figure of St Michael, with his Sword of Truth and to the right is another figure, possibly that of St Uriel. Incised inscriptions along the bottom left and right edges that read:

Coincidentally, we recently had the foot board (see DAS Journal 29 page 128) and also listed on our website.
So to source the companion piece was almost a minor miracle in itself.

Mary Seton Watts (nee Mary Seton Fraser Tytler) (1849-1938), symbolist craftswoman, socialist and pioneer of the Celtic style much used at Liberty was the only individual designer/craftsperson ever mentioned by name by Liberty & Co, thereby breaking their traditional policy. 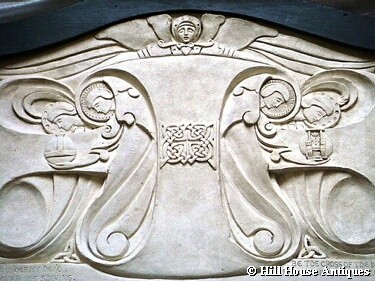 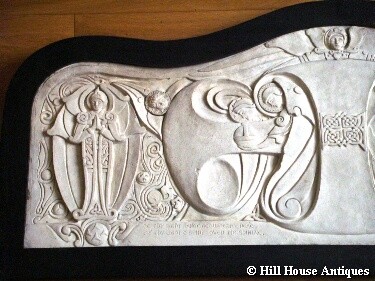 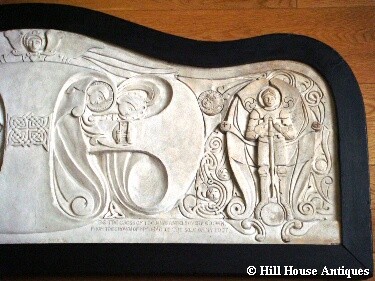