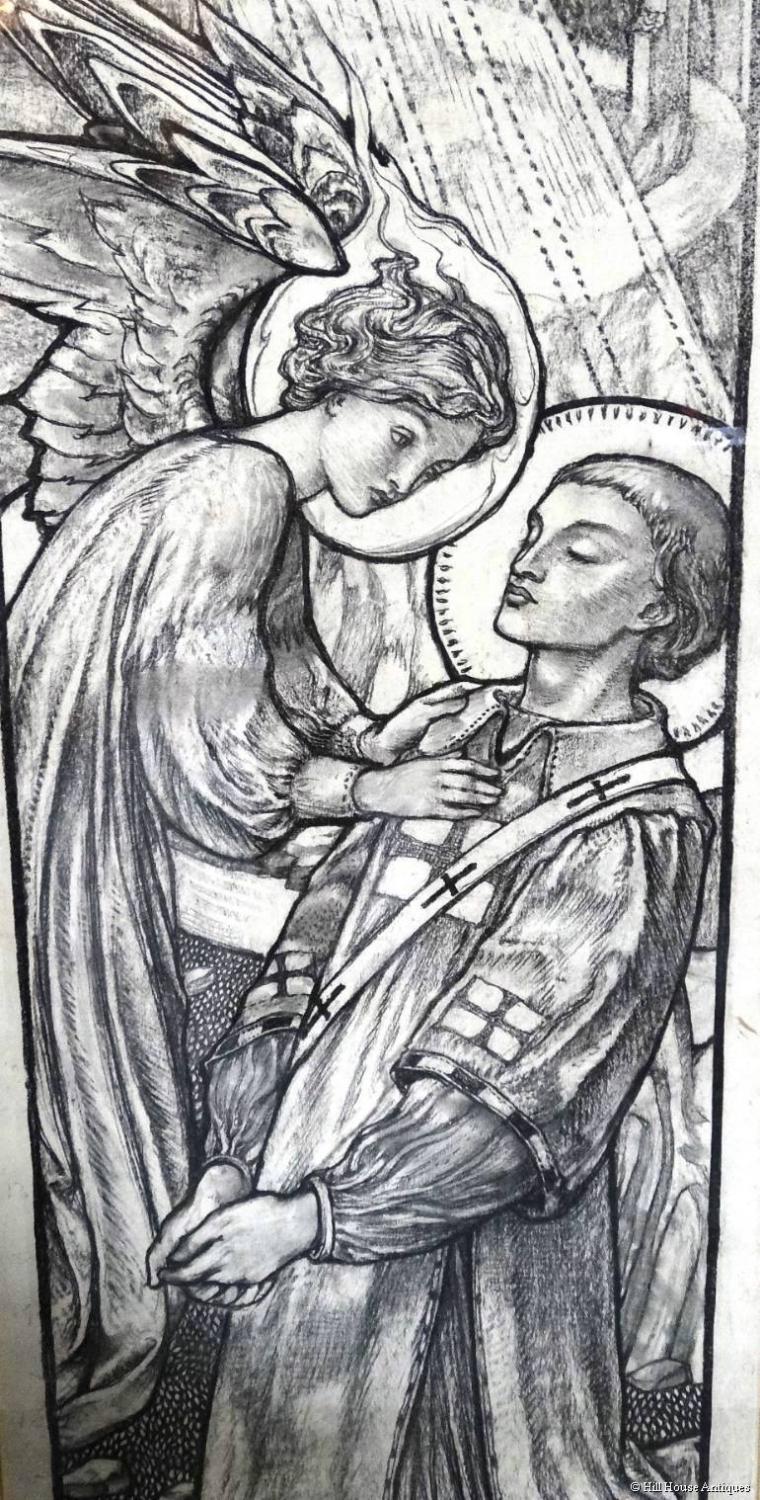 An original large Arts & Crafts stained glass window monochrome design; of an angel descending on a saint,
by Louis B Davis (1860-1941).

Annotated bottom right “Paraclitus autem Sp(iritus) S(anctus)”
from John; Chapter 14 and also used in Beneventan Chant. Further annotations and his initials
top right by Davis, “I am sending this as a guide for tone in painting……L.D.”; c1928.

This is an executed design of one of the stained glass windows in The Parish Church of St
Laurence in Ludlow, Shropshire (see third image).  Davis completed two sets of windows for this church.

The fourth window in the North Aisle was inserted in 1912 and commemorated
Humphrey, the eldest son of Theophilus Salway. The second window (which relates to our
design) in the north aisle was inserted in 1928. This was given by a Mrs Gratton in
memory of Theophilus Salway and his sisters Agnes, Mary and Katharine. The first light
depicts an angel descending upon a kneeling St Agnes, a Roman virgin martyred under
Diocletian in AD 304. In the second light (our design), Davis depicts the martyrdom of
St Stephen.

Louis Davis (1861-1941) was a famous English illustrator, water colourist and stained glass
artist; an active & important member of the Arts and Crafts Movement. He started his
working life in the 1880’s as an illustrator with the English Illustrated Magazine and later
became a popular designer of prints which were published by the Fitzroy Picture Society and
the Medici Society.
In about 1890 he met Christopher Whall and lodged with him in his
house in Dorking, Surrey. At this time he began to learn the techniques of glass painting. As
with others, he was deeply influenced by John Ruskin, William Morris & Edward Burne-Jones,
and they all designed stained glass. Indeed, it is for his stained glass that he is probably best
remembered. Davis designed and created a number of important stained glass windows; the
WWI memorial window at Cheltenham College, the choir windows at Dunblane Abbey,
amongst others. Sir Nikolaus Pevsner described him as the last of the Pre-Raphaelites.