An original gouache by Louis John Rhead (American, 1857-1926) in what appears to be the original (green velvet) mounted gilded frame; entitled “Easter Number” to lower centre and signed lower right. Also painted inscription “Copyright by the Bacheller Syndicate”; the first modern newspaper syndicate in the United States, founded in 1884 by Addison Irving Bacheller (1859-1950); journalist and novelist.
An original design for undoubtedly, a magazine cover; c1895. Louis Rhead was orginally from a family of well known English artists. He was sent to Paris aged 13 to study under Boulanger. He later returned to England and continued his studies under Edward Pointer and, like John Hassall, under Aphonse Legros. In the late 1880s he settled in the United States, later visiting Paris and befriending the famous French Art Nouveau master, Eugene Grasset, who naturally greatly influenced him and his work. Amongst other artists, Rhead was at the forefront of the American Art Nouveau Movement and during its best years of 1894 to 1896, he created lithographic posters for both The Century Magazine and for Scribners; the former having produced some of the greatest Art Nouveau posters during this period.
h: 26” w: 19” inc frame. 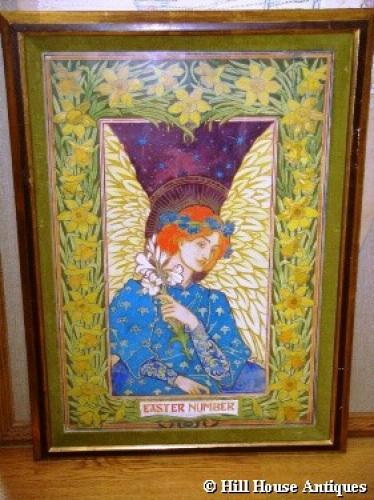